or let us put you in the cast that will make you shine!

Each Cast will perform in 2 shows.


​Video Auditions due - Jan. 1, 2023
After you register - Audition Information will be emailed to you.

Please note - The last few rehearsals before the show will  have extended rehearsal times by 1 hour  to put the final touches on the show.

(Dress rehearsal and all shows - MANDATORY)


Tuition $475.00 - includes instructional time, performances and show t-shirt!
Sibling Discount - 15% off Tuition for 1st additional sibling  enrolled and 20% for all other siblings!
​

Payment info will be sent out after auditions.

Tuition can be divided up into  4 payments. 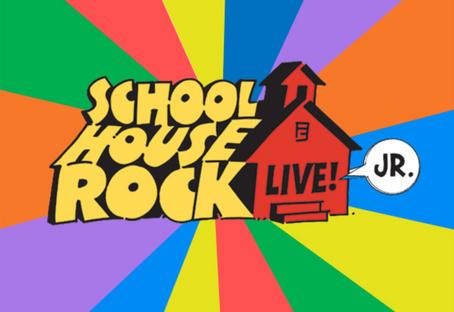 The Emmy Award-winning Saturday morning cartoon series and pop culture phenomenon is now the basis for one of the most fun musicals ever to hit the stage, Schoolhouse Rock Live! JR.

This energetic musical, follows Tom, a young schoolteacher, who is nervous about his first day of teaching. He tries to relax by watching TV, when various characters representing facets of his personality emerge from the set and show him how to win his students over with imagination and music. Memorable songs as "Just a Bill," "Lolly, Lolly, Lolly" and "Conjunction Junction" bring his lesson plans vividly to life.